With the approval of the resolution, there is now a 30-day window in which those who oppose the decision could petition for a referendum, or vote, to affirm or reject the commissioners’ resolution. The petition must have at least eight percent of the number of registered electors who voted in the county in the most recent gubernatorial election. In Seneca County, this means about 1,532 signatures.

Board President Mike Kerschner said the resolution is meant to give more local control to those most impacted by large alternative energy projects. 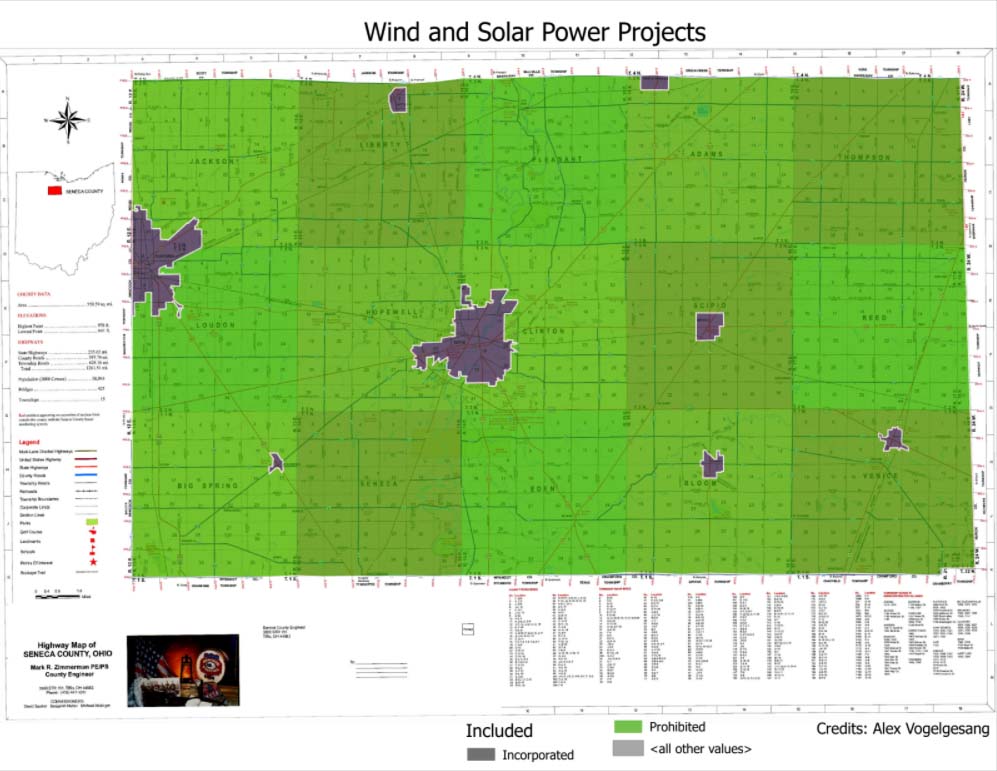 Map of Seneca County showing the prohibition zones for solar and wind energy projects in green, and incorporated zones, such as cities and villages, in gray. (Credit: Seneca County Board of Commissioners)

He said after the meeting that if there is no referendum and the resolution stands as approved, companies or landowners interested in establishing a large or economically-significant solar or wind project could come to the commissioners directly to request changes to the resolution and map that was approved.

In other business, the commissioners briefly reviewed the 2022 budget. Votes on the General Fund, non-General Fund and capital budget are expected during the Dec. 2 meeting.

The initial General Fund budget included more than $20 million of requests. County Administrator Stacy Wilson presented an $18.9 million budget for the commissioners to review and work on before next week’s budget vote.

The County Budget Commission certified $19 million in revenue for 2022, and the commissioners have made it their goal to approve a balanced General Fund budget.

The administrator’s proposal does not include salary increases for employees, but Kerschner said when 2021’s financial picture becomes clearer, a decision on that will be made.

He also said several other items are pending more information, such as a decision to retain a second agriculture educator position through the Ohio State University Extension Office.

Also during the meeting, Kerschner read a proclamation recognizing November as Adoption Recognition and Recruitment Month.

In new business, the board approved:

Cost of Solar Panels For Home 2021 | What Homeowners Need...

DIY How To Understand and Size Your Off Grid Solar Power...