COP26 explainer: The importance of solar energy and its incredible growth story

Accelerating the transition from coal to clean power is a key focus of this year’s COP26.

The power sector accounts for a quarter of global greenhouse gas emissions and, to meet the goals of the Paris Agreement, we need to move away from coal and towards clean power about five times faster than at present.

There are lots of big opportunities available as generating power using solar and wind is now cheaper than burning coal in most countries, generating more jobs and giving us cleaner air.

In a new video short by the Loughborough University PR team, Professor Michael Walls, a Professor in Photovoltaics for Power Systems in the Centre for Renewable Energy Systems Technology (CREST) and the Director of the EPSRC Supergen Solar Network, discusses what has been achieved so far with solar energy, its incredible growth story, and the contributions of Loughborough University in this area.

“Climate change is the most pressing problem facing mankind and we have to find ways of generating power that doesn’t produce carbon dioxide, and solar has to be one of those ways”, says Professor Walls.

He continued: “In the Middle East, the cost of power from solar utilities is down to one cent per kilowatt hour and even in the UK we’re as low as 4.5p per kilowatt hour. It’s an extremely attractive form of electricity generation.

“It is growing fast, so for example in 2004 we first got beyond one gigawatt in worldwide production and in 2021 it is forecast that we will exceed 200 gigawatts. That’s a 200-fold increase in 17 years, it’s an incredible growth story.”

CREST academics have helped improve global understanding of how new solar technologies work – with a particular focus on thin-film solar technology – and how we can increase their efficiency. 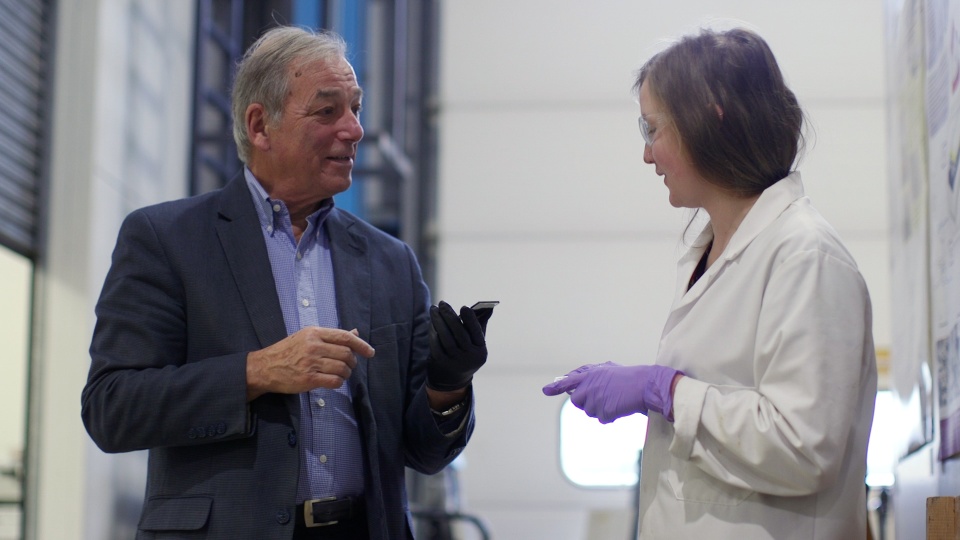 Professor Walls also says that Loughborough University and CREST have “educated a massive cohort of people who have skills in renewable energy and are now working around the world in solar companies or in R&D (Research and Development)”.

He says the combination of research and education will help “lower the cost of solar electricity and reduce greenhouse emissions at the same time”.

More on the research undertaken at CREST can be found on the dedicated webpage here.

Loughborough is one of the country’s leading universities, with an international reputation for research that matters, excellence in teaching, strong links with industry, and unrivalled achievement in sport and its underpinning academic disciplines.

It has been awarded five stars in the independent QS Stars university rating scheme, named the best university in the world for sports-related subjects in the 2021 QS World University Rankings and University of the Year for Sport by The Times and Sunday Times University Guide 2022.

Loughborough is consistently ranked in the top twenty of UK universities in the Times Higher Education’s ‘table of tables’ and is in the top 10 in England for research intensity. In recognition of its contribution to the sector, Loughborough has been awarded seven Queen’s Anniversary Prizes.

The Loughborough University London campus is based on the Queen Elizabeth Olympic Park and offers postgraduate and executive-level education, as well as research and enterprise opportunities. It is home to influential thought leaders, pioneering researchers and creative innovators who provide students with the highest quality of teaching and the very latest in modern thinking.

Solar Power Is Now as Inexpensive as Grid Electricity In Odisha

How Well Does A Tesla Solar Roof Handel Rain? | Tesla...

Why Tesla's Solar Glass Roof Is going to be Huge For...

How many solar panels are needed to run AC on an...

A simple capacity test on a 450 amp-hour battery...
Read more

WE ARE BUILDING A NEW BEACH HOME HERE IN...
Read more