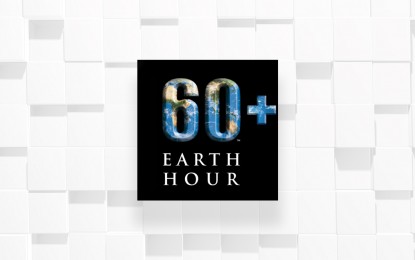 MANILA – Department of Environment and Natural Resources (DENR) Secretary Roy A. Cimatu is once again calling on all Filipinos to participate in the global Earth Hour movement on March 27 in support of the agency’s efforts to mitigate the increasing effects of climate change.

“I enjoin all households and businesses across the country to jointly switch off their lights and other energy-consuming devices for an hour, and to encourage action towards the environment even after the lights are turned back on,” Cimatu said in a news release on Thursday.

Computers, television sets, air conditioning units and non-essential lights may be switched off to express a shared concern for the environment.

“Now more than ever, environmental responsibility is critical and must be sustained. Let us do our share and switch off for an hour in support of a healthy future for humankind and the environment,” Cimatu said.

However, he emphasized that beyond this symbolic action, Filipinos should reduce electrical consumption to lessen carbon footprint and emissions generated by carbon dioxide and fossil fuel, which are major causes of climate change.

He also proposed shifting to renewable sources of energy such as solar technology and use of light-emitting diode (LED) light bulbs, which draw less power compared to incandescent and fluorescent lights.

Supporting worthy causes like the Earth Hour movement has become more significant than ever, Cimatu said as he noted the importance of nature conservation in combatting climate change, biodiversity loss, and even health risks.

“As the Covid-19 pandemic continues to rage, let us recognize the inevitable truth that the state of our planet and our health and well-being are inherently related. We should persist against harmful human activities and shift towards environment-friendly lifestyle choices,” he added.

He said while the DENR addresses deforestation, plastic pollution, and illegal wildlife trade through its policies and programs, Filipinos are also encouraged to do their share.

“Educate yourselves, spread awareness, support government campaigns, and rethink ways how to eat, buy and travel. Let us take climate actions especially now that we are in the midst of a health crisis. When we protect our climate, we protect our health,” Cimatu said.

Earth Hour is an annual global environmental movement organized by the World Wildlife Fund to encourage individuals and organizations in taking tangible actions and commitments for the planet by jointly turning off non-essential lights for an hour.

The movement started in 2007 in Sydney, Australia, and eventually spread to over 7,000 cities and 180 countries and territories. (PR)

How to install solar power system?

Do It Yourself Solar Power? – Easy DIY Solar Panel Installation!

Make your own Photovoltaic Off-Grid System

How to Install Solar Panels : Tools for Installing Solar Energy...

Solar Panel Systems for Beginners – Pt 3 How to Build...

What is Solar Power? | National Geographic