Rio Tinto unveiled a pathway for the ongoing development of the underground project at Oyu Tolgoi in Mongolia, one of the largest known copper and gold deposits in the world (earlier post). The definitive estimate details how Oyu Tolgoi underground will achieve sustainable production for Panel 0 by October 2022 for development capital of $6.75 billion. In 2019, Rio Tinto projected that cost overruns would take the capital requirement to between $6.5 billion and $7.2 billion.

Rio Tinto and its partners, the Government of Mongolia and Turquoise Hill Resources (TRQ), need to continue to work together to finalize three other milestones—the outstanding government approvals, funding and a power solution—in order to ensure that the project can commence caving operations in 2021. This will unlock the most valuable part of Oyu Tolgoi. 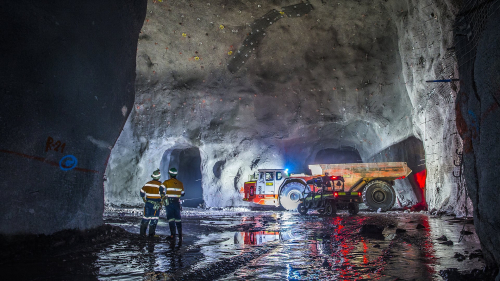 At peak production, Oyu Tolgoi is expected to operate in the first quartile of the copper cash cost curve and by 2030 is expected to be the fourth largest copper mine in the world. At full production, the underground mine will produce 95 thousand tonnes of ore each day. This will triple Oyu Tolgoi’s annual production of copper concentrate.

Panel 1 and Panel 2 (which are required to support the ramp-up to 95,000 tonnes of ore per day) are currently subject to further studies, with initial recommendations expected by mid-2021. These studies will also consider options and associated costs to recover the copper contained within the pillars added to the mine design of Panel 0.

Oyu Tolgoi is expected to produce 480,000 tonnes of copper per year on average from 2028 to 2036 from the open pit and underground, compared with 146,300 tonnes in 2019 from the open pit. The underground Ore Reserve has an average copper grade of 1.52%, which is more than three times higher than the open pit Ore Reserve, and contains 0.31 grammes per tonne of gold. The size and quality of this Tier 1 asset provides additional expansion options, which could see production sustained for many decades.

We now have a pathway to bring the underground project into production, which will unlock the most valuable part of Oyu Tolgoi. We will continue to work together with the Government of Mongolia and TRQ to progress the project, including finalising all necessary approvals and agreeing a solution on power and funding.

Oyu Tolgoi is jointly owned by the Government of Mongolia (34%) and Turquoise Hill Resources (66%, of which Rio Tinto owns a controlling interest of 50.8%). Rio Tinto has been the manager of the Oyu Tolgoi project since 2010.

Underground. Most of the value of Oyu Tolgoi is deep underground; the planned mining operation will eventually have approximately 200 kilometers of tunnels, with an average height of 5.5m and width of 5m. These will be reached by 5 shafts, with the deepest reaching 1.3 km below the surface.

Rio Tinto will use block caving technology to mine the ore body. Block caving is technically complex, but it is also one of the safest and most cost-effective methods of mining ore from deep below the ground as it uses the force of gravity, according to the company.

In block caving, a void is created under the ore body, which then collapses gradually under its own weight. The ore passes through funnels in the rock, known as draw points. A series of lateral tunnels over several levels are used to extract the ore and to haul it for crushing before it is transported to the surface via shaft or conveyor belt.

An explanation of block caving, using Rio Tinto’s Northparkes copper mine in Australia.

More than $11 billion has been invested in Oyu Tolgoi to date, including the open-pit mine, concentrator and associated infrastructure. Of this, $4 billion has been spent on the underground project, with more than $3 billion awarded to Mongolian companies and suppliers.

A QUALITY Flexible SOLAR PANEL On A BUDGET! 100 Watt Bouge...

Solar Panel For Home | On Grid vs Off Grid Solar...

How Tesla Can Build MILLIONS of Cars a YEAR

ARE ALL SOLAR PANELS BUILT THE SAME? You won't believe the...